History Of Our Churches

St Andrew’s is the Parish Church of Hornchurch. It is listed by the Department of the Environment as a Grade 1 listed building – a building of outstanding distinction. A church has stood on this site for over 800 years, each generation in turn having cared for it and added to or subtracted from it, altering the Church to suit needs of the time.

The present church is built of septaria and ragstone with some brick. The North wall contains many bottles, placed both neck and base outwards. These are an interesting and unexpected addition to the masonry.

The tower is thought to have been built by William of Wykeham and the fact that it closely resembles New College, Oxford supports this theory. At the top of the West face of one of the turrets is a figure of a bishop believed to represent William.

Inside, the four bays and cylindrical columns with moulded capitals in the nave, together with the triple sedilia, piscine and hagioscope, date back to the mid 14th century. 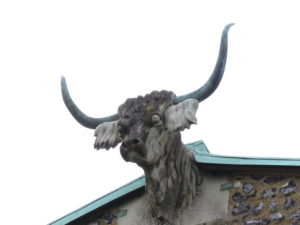 At the East end of the roof is a bull’s head statue, which is a unique feature to find on a church. However, in 1222 the first written reference to the church mentions the monasterium cornutum or horned church at Havering. There are numerous legends and theories to explain the existence of the horns, but the truth remains obscure. In 1610 the horns were thought to have been made of lead but when they were repaired in 1824 they were found to be made of copper. In 1999 the copper horns were stolen from the bull’ s head. They were never recovered and new horns replaced them in 2001.

The tower is separated from the church by a handsome oak screen, placed there in 1934 in memory of Edgar Bratchell who took a leading part in most of the village activities. It commemorates his 50 years in the choir. A bench on the south wall incorporates a list of Priors and Chaplains from 1206 to the present day. When New College, Oxford, was endowed with St Andrew’s and its lands, it appointed a Vicar Temporal to be, as the Book of Common Prayer would have expressed it, their ‘Ordinary’. As a result of this the incumbent of Hornchurch enjoyed freedom from the jurisdiction of the Bishop. This was called a ‘Peculiar’ and ended in 1901. Before 1901 the Bishop had to ask permission to enter the church. New College, our Patron, is still involved with the Bishop in appointing the Incumbent.

Stairs lead to the ringers’ chamber. St Andrew’s has had ten bells installed over some 500 years. In 1552 it is known that five bells were hanging in the tower; in 1779 these were recast into six and in 1901 two further bells were added.  In November 2001 the then eight bells were increased to ten, approximately one hundred years after the last addition.

The clock on the north side of the tower was a gift from Thomas Brandon in 1674. In 1982 the heavy weights which provided the driving force for the pendulum and the striking hour bell were replaced by smaller weights which use electricity to keep time.

Memorials within the Church

The Withering Memorial commemorates Thomas Withering, Postmaster General to Charles I who lived at the Manor of Nelmes; on September 28th 1651 he died while travelling to church.

The Rame Memorial is made of alabaster. Francis Rame, his wife, eleven sons and one daughter are shown on this. Francis was steward to Sir Anthony Cooke of Gidea Hall, tutor to Edward VI.

High on the North wall of the sanctuary is the Spencer Memorial by the famous sculptor, Flaxman. The Spencer family lived in Hornchurch Hall, which stood opposite the Church.

On the East corner of the South wall can be seen the memorial to Sir Franciscus Pruiean. Originally this would have been painted and traces of colour can still be seen. Sir Francis was President of the College of Physicians. He lived in Suttons Gate when staying in Hornchurch.

Under the fitted carpet in the Chancel are several memorial floor slabs, brasses and indents, the earliest of these being that of Boniface de Hart, who was Prior from 1323-25. There are also complete brasses of Thomas Drywoode, his wife and children in 1591, Elizabeth and Alice Drywoode in 1601, and Thomas Hone, his wife, six sons and six daughters in 1604.

The memorial to Richard Blakstone can be found in the North wall and shows two figures kneeling in prayer, presumably he and his wife. The space left for her memorial was never filled in.

The Sportsman’s Battalion brass on the North wall commemorates members of that battalion who suffered heavy losses in the First World War.

In 2017 Niue RSA came to visit us as part of their WW1 Centenary Tour of Europe. We have four of there islanders buried in our grounds and often have visitors. To commemorate the visit and the connection that Hornchurch and St Andrew’s have with Niue, they presented us with a plaque which was mounted on the wall of the church in the chapel. The plaque reads ‘ Commemorate soldiers who left 13th October 1915 to sail to the other side of the world and fight for King George V. 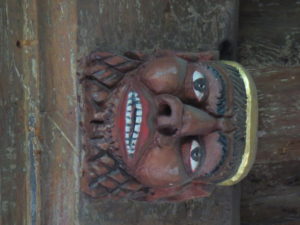 The ceiling of the church dates from the 15th century. During the 19th century the ceiling was covered over but in 1957 the original was revealed. A number of bosses can be seen.

In 1962 the Victorian stone pulpit was replaced by the present oak pulpit, complete with sounding board. This was designed and carved by Gwynneth Holt. It was given in memory of Honora Willis who died on July 31st 1947.

A table tomb of William Ayloff of Bretons can be found in the sanctuary. The arms displayed on the sides of the tomb show Ayloff impaling Shaa Ayloff, Shaa impaling d’Arey of St Osyth and Bruges of Gloucester impaling Ayloff. William’s son was responsible for making returns to the government of the vestments and furniture of Essex churches at the time of the Reformation. A descendent of his paid a high price for his loyalty to the Stuart cause when, as High Sheriff of Essex, he went with riders from Bretons to Colchester the day before the Parliamentary army began the siege. When this ended he was at first ordered to be shot, but instead he was shipped to Barbados to work on a plantation. When Charles II regained the throne, Ayloff was made Knight of Essex.

Lies in the ringers’ chamber and was given in memory of Betsy Mashiter, who died in 1860. The central light shows Henry II presenting to a monk of the Abbey of Montjoux a Charter granting land in Havering. On the left are the arms of New Zealand noting that Grey Towers was their first base camp in England during the First World War. Later it became their hospital and in 1916 four young Maori soldiers were buried in St Andrew’s Churchyard. On the right are the arms of the Fraternity of Trinity House. At one time the Church spire acted as a navigational landmark for Thames pilots and Trinity House contributed an annual peppercorn rent towards the upkeep of the spire.

The East window replaces one destroyed by enemy action in the Second World War, and is dedicated to the memory of Thomas Mashiter. It shows the arms of the Dioceses of Rochester, London, Chelmsford, St Albans and Essex together with those of the Urban District of Hornchurch. In the left window can be seen Edward the Confessor in front of Westminster Abbey holding a ring. This refers to the legend of Have-a-ring. Next can be seen    St Andrew. In the centre is Christ standing on the shores of a lake. Then comes St Peter, and on the extreme right is William of Wykeham standing before New College. The window was designed by Gerald Smith and made by Nicholson Stained Glass Studio in 1954.  Windows on the North wall were made in the late 19th and 20th century. On the left of the North door the windows show Jesus in the garden of Gethsemane, Jesus with Pontius Pilate and Jesus on the road to Calvary. Further along is the memorial window to Sarah Williams, who lived at the manor house of Langtons. The Virgin Mary, St Elizabeth and St Sarah are shown in this design by Haydon Bacon of London.

In 1991 a window was installed to commemorate the six hundredth anniversary of St Andrew’s becoming a Parish church. In the left light can be seen William of Wykeham in 1391 receiving a licence from Richard allowing him to purchase the lands of the monks of Montjoux in Havering to endow his college of St Mary in Oxford (known as New College). The right hand light represents the Parish in 1991 with figures depicting worship, outreach and pastoral care covering all ages and the co-operation of clergy and laity. Recent history of the time is symbolised by a Spitfire representing the important role of the Hornchurch Airfield in World War II. Local industry is acknowledged with a Ford Fiesta car and an Amstrad computer. In the background of the window can be seen New College, St Andrew’s, and the daughter churches of St George’s and St Matthew’s. Linking the whole window is the figure of the crucified Christ with arms stretched wide in compassion over the Parish, as an eternal presence.

In 1930 a ‘temporary’ building on the present site was donated for use as a private school and a Mission Hall to meet the needs of the new population; between 1926 and 1936 the population of Hornchurch grew from 12,000 to 72,000. The temporary building was basically an iron frame with brick walls, with little or no foundations, supporting a wood-lined asbestos roof.

In 1935 the chancel and vestries were added, dedicated to St George, and consecrated by Revd T Inskip, Bishop of Barking. The Sanctuary was pictured in ‘The Architect’ as a good example of modern architecture. The bell was donated by the Whitley family, a unique acrobatic troupe who lived nearby.

The three stained glass windows in the Sanctuary depict: St Mary the Virgin and Child; Christ ‘Behold I am alive for evermore’; and the Patron Saint St George slaying the dragon. The original harmonium, operated by a foot pump, was replaced by a pipe organ in 1939 which was replaced by our electronic organ in 1970.

During the war years the Scout Patrol leaders helped to assemble gas masks, served as messengers at First Aid posts, erected Morrison air raid shelters and shared fire-watching duties with St Andrew’s. Imagine the terror when bombs fell in the Dell and the Churchyard!

1960 the lawns and gardens were laid out.
1970 the roof was replaced.
1976 the house at 85 Kenilworth was purchased.
1984 an extension was added beyond the vestries at the rear of the chancel. 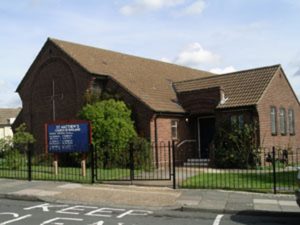 Take your everyday, ordinary life – your sleeping, eating, going to work, and walk around life – and place it before God as an offering. Embracing what God does for you is the best you can do for him.

By continuing to use the site you agree to our use of cookies. Find out more.